Josy, a twelve year old girl, has an inexplicable illness and vanishes without trace from her doctor's office during treatment. Four years later: Josy's father, well-known psychiatrist Viktor Larenz, has withdrawn himself to an isolated North Sea island in order to deal with the tragedy. Until he's paid a surprise visit from a beautiful stranger. Anna Glass is a novelist and she suffers from an unusual form of schizophrenia: all the characters she creates for her books become real to her. And in her last novel she has written about a young girl with an unknown illness who has vanished without a trace.

Is the inconceivable possible? Do Anna's delusions describe Josy's last days? Reluctantly Viktor agrees to take on Anna's therapy in a last attempt to uncover the horrible truth behind his daughter's disappearance . . .

This book simply blew my mind.

I took it from my boyfriend's shelf. It's his favourite book and he said that I won't like it for sure because it's not my type of books.
But, it seems that it is.

I felt in love in cover. I posted English edition cover at the beggining, but here is Polish one: 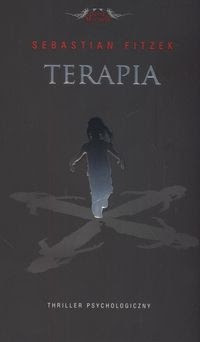 It made me read it faster! I gave up on other books I''ve been reading and... I had this book with me everywhere.

It wasn't easy, but it was a fast read. It surprised me. It's because of short chapters, which leave you with more and more questions.
It's a psychological thriller and it really made me anxious, as weird as it may sound.
Mystery is perfect and it makes you feel interested till last word. Literally.
You think it ends and then... Boom. You think it ends again and... I don't want to spoiler, really.

I tried to find something I didn't like, but I simply can't.

5 STARS. Adding to my 2012 favourites list.
Even if you think it's not your type of book, try to find it somewhere. You won't be dissapointed, really.

PS: Which cover edition look better for you?

---
Sorry I post it so late! I already wrote it few days ago but I didn't have time to post it on blog!
I want to thank all my new followers! Every of 15 follows made me so happy :)
I hope I will have more readers anyway!
I don't write only for myself, you know. ;)

Posted by Disincentive at 5:31 PM

Email ThisBlogThis!Share to TwitterShare to FacebookShare to Pinterest
Labels: 5, book