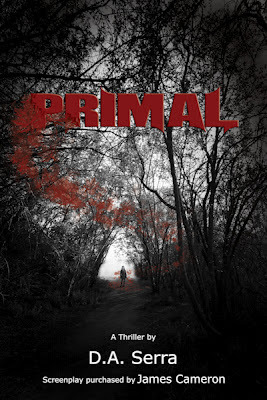 The writer who made you laugh with Punky Brewster, who made you cry with Just Ask My Children, will now make you cringe with PRIMAL. This story was originally purchased by one of America’s most prestigious storytellers James Cameron.

What if the worst happens and you are not a cop, or a spy with weapons training and an iron heart? What if you’re a schoolteacher – a mother? In this gritty crime thriller a family vacation takes a vicious turn when a fishing camp is invaded by four armed men. With nothing except her brains, her will, and the element of surprise on her side, Alison must kill or watch her family die. And then – things get worse.

Procrastination
by D.A. Serra
It seemed that my pattern of procrastination had an identifiable redundancy.  I decided to actively study the clues and see if it revealed anything useful.  So I took notes and examined my own behavior.  I found that my procrastination took the form of “Oh, let me just get out of the way…” and then a series of things followed: write out the bills, fight the insurance company, finish the laundry, get the dinner shopping done, check in with my mom, my sisters, my dad, unload the dishwasher, make the dog food (yes, I made my dog’s food – don’t ask). And consequently I would end up feeling terrible that I had not spent enough hours writing.  It didn’t make sense – I must write – I wanted to write, and yet.
I’ve written my entire life.  One time a gentleman asked me what was the difference between someone who writes and a writer.  I told him with complete confidence that lots of people write as a tool to make a living, a writer is someone who writes even when there is no reasonable assumption that anyone will ever read it – ever – that’s the difference and that was who I’ve always been.  It was not a lack of drive or desire that led me astray – so why?  Why did I let things get in the way?
When I studied this interruptive behavior I realized that it wasn’t that I was procrastinating to keep from writing at all, it was that I needed a clear mind to write well, and if things were hanging over me I had constant unconscious pressure to eliminate those things before I could settle down intellectually.  So it wasn’t actually that I was avoiding writing, it was that in order to write successfully I needed a clear mental palette or I could not relax.  When I considered this I knew it was true, because the entire time I was doing those other things my anxiety levels rose because I was not writing.  Well, this was unacceptably dysfunctional.  Now that I had identified the issue I needed a solution.  I needed to not only set a schedule for my writing, but also for most other things in my day.  This was an organizational issue not a creative issue.
Firstly, I started cooking on Sundays.  I would stock up at the store and make or prep four meals for the upcoming week.  Once I focused on how to do this it wasn’t as hard as I thought.  I turned on an audiobook, which read to me aloud in the kitchen, and I cooked several meals simultaneously and stored them in the refrigerator.  It took a little foresight and energy but it was doable.  Next, for my regular check-in phone calls, (my family is uncommonly close) I made the decision that all phone calls would take place in the later afternoon after work.  Yes, sometimes there was complaining, bickering, and sibling stuff going on in the background, but it actually taught the kids to be more independent and rely less on me.  I was there and helpful for the big issues, but I was also on-and-off the phone, as a result they would get tired of waiting and try harder to do it themselves so they could be done sooner: a win-win.  The harder organizational change for me was not answering the phone – I feared “what if it were important?”  So I got caller ID and let it ring unless it was the school.
Naturally your issues differ and I do not assume that my solutions will work for you.  What I’m suggesting here for other writers, many of whom work from home and have at least three other jobs, is to take some time to understand why you’re procrastinating, and then, out-think it.  Follow the clues: is it boredom with what you’re writing; is it distractions you can manage; other responsibilities you can rearrange; is it just that you need a clear head to relax into the words.  If you truly are a writer, and I assume you are or you wouldn’t be reading this, once you spend the time to identify the cause of the procrastination you’ll be amazed at how creative you can be to disarm it.

Posted by Disincentive at 5:00 AM