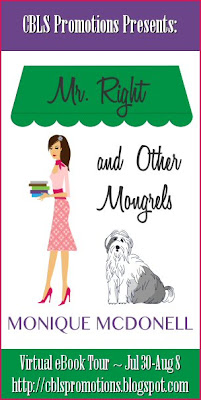 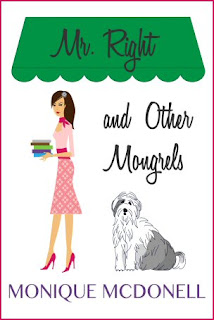 Blurb:
Blissfully happy in her own universe Allegra (Ally) Johnson is the sweet best friend everyone wants to have. Quietly and independently wealthy she runs a charming second-hand bookshop in beachside Manly. Heck, sometimes she even goes downstairs from her flat to run the shop in her Chinese silk pyjamas. It sounds like bliss. But is it enough?

When dog-phobic Allegra is rescued from an exuberant canine by the chivalrous Teddy Green, Australia’s hottest TV celebrity and garden make-over guru, her life begins to change. Dramatically!

Unaware of Teddy’s fame Allegra finds herself falling for him, despite her best attempts to resist his charm. Supported by her eccentric family and her fabulous gay friend Justin, Allegra embarks on an on-again off-again romance with Teddy, complicated by his jealous ex-girlfriend, fashionista Louisa and her own narcissistic hippy mother Moonbeam.

Will Ally be able to overcome her insecurities and find happiness with this possible Mr Right or will Teddy’s celebrity lifestyle prove to be too much? Mr Right and Other Mongrels is a light-hearted story about how one chance encounter can change your life.

ABOUT THE AUTHOR
About the Author:

I am an Australian author who writes contemporary women's fiction including chick lit and romance. I live on Sydney's Northern Beaches with my husband and daughter, and despite my dog phobia, with a dog called Skip.

I have written all my life especially as a child when I loved to write short stories and poetry. At University I studied Creative Writing as part of my Communication degree. Afterwards I was busy working in public relations. I didn't write for pleasure for quite a few years although I wrote many media releases, brochures and newsletters. (And I still do in my day-job!)

When I began to write again I noticed a trend - writing dark unhappy stories made me unhappy. So I made a decision to write a novel with a happy ending and I have been writing happy stories ever since. I began a year-long writing course at the NSW Writers Centre and (thank goodness) its members morphed into a writing group known as The Writer's Dozen. We published a highly successful anthology, Better than Chocolate, in 2008.

In 2008 I was also selected for the QWC/Hachette Livre Manuscript Development Course for my novel Mr Right and Other Mongrels. In 2009 I received a Highly Commended in the Romance Writers of Australia's Valerie Parv Awards for my novel Hearts Afire.

These are the first two books I will be e-publishing in 2012 along with a third novel, A Fair Exchange. I'm not really like the characters in my books at all although I do share something in common with each of them - Allegra (Mr Right and Other Mongrels) has a dog phobia like me, Cassie (Hearts Afire) falls in love on a tropical island and I met my husband that way and Amelia (A Fair Exchange) was an exchange student who is now all grown up.

My mother however was going nowhere. Worse than that she kept leering at Teddy, which simply made me uncomfortable.

I really didn’t know what was going on with Teddy and me but I surely didn’t want anything going on between Teddy and Moonbeam.

“Teddy, do you want to help me get some dinner together?”

“No Allegra, he can stay and keep me company.” She was good.

“How about we both help Ally out.” What a guy.

So we piled into my small kitchen with her standing a bit too close to Teddy for my liking.

“So what are we having?”

“Potato gnocchi with tomato sauce and a salad.”

I had already cooked the potatoes so I put Teddy to work mashing them. And I pulled down a jar of sauce I had made from organic tomatoes earlier in the summer and put it on to simmer.

Teddy looked at me quizzically “You jar your own sauce?”

“Uhmm yes”. I was always kind of embarrassed by my love of cooking. It makes me seem like a possessed potential housewife or something. I mean I know you don’t go to a club and discuss organic cooking; it doesn’t get the men flocking. Ultimately though I just like to cook and eat well.

“Well, Allegra, that being the case I may have to marry you.” He winked just so I’d know he wasn’t serious. “I’ll grow the veggies and you can make the sauce.”

I noticed Moonbeams dark eyes got a tad darker and flashed a bit wilder.

“I don’t know that there is room for a veggie patch in my flat or your designer terrace either for that matter,” I laughed.

“Well, we’ll just have to move to the country.”


“I’m heartbroken,” he feigned distress as he mashed. “I offer to give up my lucrative TV career and to grow veggies and marry you and you won’t leave the bookshop!”

Why I write chick lit?
When you write a book, especially a first book, everybody asks you why you wrote that book in particular and why in that style. It doesn’t matter if it’s a thriller, sci-fi, erotica or literary fiction the questions are the same.
So, since Mr Right and Other Mongrels has been released I too have been asked those questions. One look at the cover tells you what sort of book it is. It’s an unashamedly light, fun read. That was actually very important to me – I read widely across many genres and I really don’t like buying a book that looks to be one thing and is, in fact, something entirely different. I wanted the cover to be truth in advertising and I think it is.
Still why that book and why that style? The impetus for the book was main character Allegra. I could see her being chased by a dog, I could see her in her bookshop and I could see her making her way through her life. The story evolved from those images.
I began this book as part of a year-long writing program to write a book in a year. I’m a very goal-focussed person. Deadlines are very important to me. I’ve had several jobs where I worked alone and I used to use deadlines to motivate myself or else it was very easy to waste time and end up in a panic. So, if I commit to writing a book in a year I can assure you that book will be finished.
When I write short stories I actually write much darker tales but if the characters are somewhat miserable and energy-sucking then you’re not with them for all that long.
With Mr Right and Other Mongrels I knew I’d be spending a lot of time with the characters and so I wanted to hang out with people who made me happy. I wanted them to be characters who I cared about but who also made me laugh and who I was happy to get up in the morning and spend the day with.
In real life we don’t generally seek the company of the most miserable person in the room and I didn’t want to do that in my imaginary world either.
I wrote it as a chick lit novel because that’s how Allegra talked to me. She told me how to tell her story. She’s an urban girl, with lots of friends and not at all unlike many people I know here in urban and suburban Sydney. Since writing this book lots of people have told me they could see themselves in her character. (Which you have to know made me very happy!) By the way, if you haven’t been to Australia the city of Sydney is very much a character in the book so it’s a fun way and inexpensive way to have a visit!
So I wrote Allegra’s story because she spoke to me and I liked her. If you read this novel I hope she speaks to you too.

If you don't see rafflecopter, enter the giveaway here.
Posted by Disincentive at 12:00 AM