[70] Dust by Devon Ashley - Top 10 mysical creatures you'd like to write about?

4. The number of times my delicate wings have been broken and clamped behind my back. 68. The number inked upon my skin, marking me the sixty-eighth pixie to be stolen.87. The number of days I’ve been wrongfully imprisoned.88. The first day the faeries will regret stealing me.Healthy. Cheery. Vivacious. All traits Rosalie has before becoming enslaved by the faeries to make an endless supply of pixie dust. Now that Rosalie has been traumatized by slave labor, extreme desolate conditions and multiple deaths, this hardened pixie is anything but. When this rebellious teenager attempts an escape, she’s isolated in cramped quarters until she learns her place. Just as she begins to let go of all that hope, she finds an unlikely friend in Jack, the faerie assigned to guard her. Interspecies dating is forbidden in the fae world, so their growing attraction is unacceptable. And even if Jack can find a way to free her, they know the prison is the only place they can truly be together.

My top choices of mystical creatures to write about (but probably won't cause by the time I get to it, it'll already be done!) in no particular order:
1. Kelpie: water spirit that haunts rivers and streams and likes to snatch and drown their victims.
2. Hell Hound or Fenrir: hellish animals loose on the rampage...think of all the damage they could do.
3. Medusa: I'd forget about how she became cursed by a God, and focus more on the idea of Clash of the Titans, and how men were always trying to collect her head. Or maybe weave in a story involving her two sisters.
4. Cleopatra: Okay, okay...she's not mystical. But I would totally write a story that made her mystical...maybe even give her some Sphinx pets.
5. Valkyries: Kick-@ss warriors with regenerative powers? Sign me up!
6. Nabbi: Norse dwarf known for creating enchanted items. I'd make him one of those crazy-minded geniuses that's mentally all over the place and gets so excited over the ideas in his head that he can't hold a conversation without jumping all over the place and confusing the heck out of the others.
I don't know...as a reader, what would you want to read about? :)

---
I'd love to read about EVERYTHING from this list. The most about Cleopatra, I think. (: I'm coming bck with another stop on this tour, a review on 20th September. Wait for it.

GIVEAWAY
It's international! What can you win? 5 pize packs! 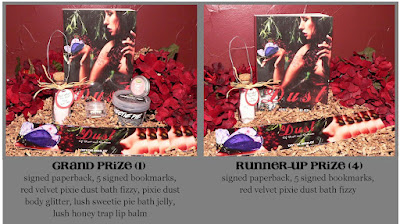 Posted by Disincentive at 4:10 PM