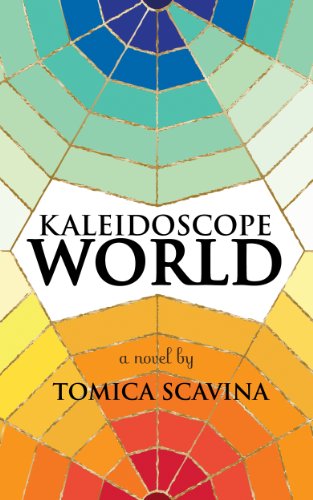 A collector of kaleidoscopes and lousy relationships, Dahlia Kasper leaves her possessive alcoholic mother and moves from New York to Barcelona. In search of lost bits of her childhood, she starts living in an apartment where her father was murdered when she was four. As soon as she enters the apartment, strange things begin to happen.
Her favorite kaleidoscope becomes a gateway to another dimension where she encounters a ghost of a famous physicist from the 19th century who tries to persuade her that reality is like a moth-eaten sweater – full of holes. He needs her to help him plug up these holes and save the world from vanishing, while the only thing Dahlia really wants to save is her sanity.
This is just a part of Dahlia’s problems. An elderly cello-playing neighbor turns her emotional world upside down and her longing for lost home takes her further than she ever imagined she could go. To collect all the scattered kaleidoscope-bits of her life together, Dahlia needs to go through an intense inner transformation that takes courage and a sharp sense of humor.
Buy Now @ Amazon
Genre – Psychological Thriller
Rating – PG
More details about the author
Connect with Tomica Scavina on GoodReads & Twitter
Website http://www.tomicascavina.com/

How to make your characters believable?
by Tomica Scavina
Everything we do present us in a certain way. Buying a red scarf, speaking in a flat tone of voice, entrusting a secret to a dog instead of a husband… Sometimes we know and sometimes we don’t know why we’re doing these things, but these whys do exist.
Maybe I bought a red scarf because I am fighting the feeling of being invisible? Maybe my voice is flat because I had a role of peacemaker in my family? Maybe entrusting a secret to my dog has more to do with my inability to trust, then with my husband’s inability to hear and understand me?
To be believable, characters also have to have their whys. It doesn’t mean that we need to explain all of these causes and consequences directly. That would be pretty boring. It means that if we spend some time thinking about past experiences that have caused our characters’ actions, somewhere in between the lines will emerge that feeling that the character is a real person with its unique life experience.
Show us their vulnerability and how they’re dealing with it
Our characters need us to think about them often. There are so many questions to think of, especially about their vulnerability and the way they’re dealing with it. If you know someone’s soft spot and if you know how he’s dealing with it, then you can say you know this person well. It is a sign of a close relationship. Here are some sample questions that can inspire you to think about it.
What makes her vulnerable? How does she act when she’s hurt? Does she run away and climb the trees in the forest or clean the floor and talk aloud to herself? And what about him? What hurts him the most? When he’s hurt, does he shout and break the stapler or watch the snowflakes melting on the tip of his finger, thinking how no one will ever understand his poetry? Does she binge eat when her boss tells her that her colleague will go to that conference in Italy or have a few bears and furiously play darts? Does he buy a cat when his wife leaves him or does he buy some pleasure from a prostitute?
Showing your character’s vulnerability and the way they deal with it is what makes them human. This step must not be overlooked.
Show us their everyday intimate moments
Everyday life is rich with little things that we don’t notice because we’re so used to it. For example, while I’m writing this post, right next to my monitor there is a little, wooden house hanging on the wall. The roof is covered with snow (white paint) and the whole house, colored in dark purple, is a bit narrow. I love it. And if I were a character, the fact that I love it would create a certain atmosphere around me.
The little things like this are very important. And again, there are so many questions that we can ask ourselves about it. Here are some examples.
Does he wear pajama with a flower or square pattern? Does she think about whitening her teeth while brushing them? When he’s scratching his head, always in the same spot, does he think about his arrogant son or a trip to Hawaii? Is he pouring coffee always to the very top of a cup because he’s too lazy to add more coffee later or because he’s a perfectionist? Is she procrastinating cleaning her windows because her mother was over controlling about tidiness or because she doesn’t want to see things clearly?
There are these whys again. There is always something to think of… And the thinking pays off. Besides the benefit of characters becoming more believable, there is a personal benefit for those writers who treat their writing more seriously: knowing your characters well helps you know better yourself through them.

Posted by Disincentive at 2:51 PM