[74] The Night Budda Got Deep in It giveaway 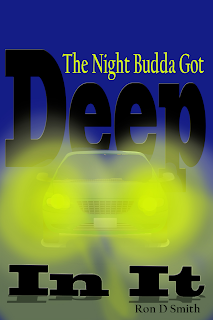 The Night Budda Got Deep in It by Ron D. Smith


Fifteen-year-old Budda (Butter with a souther drawl) Jessico leads an unremarkable and anonymous life in suburban St. Louis. He’s not unpopular, because someone would first have to notice him. Except for the tormenting by his older brother, however, Budda is content. He follows his father’s rules and stays out of trouble. Then, at the urging of Blood Mama (his birth mother), a voice only Budda hears, he catches a bus to Kentucky to rescue his former foster sister, Addie.
As soon as Budda reaches Louisville, he goes to a McDonald’s for the first time in his life where he meets the resolute Baresha, a fellow runaway on her own adventure. Then Budda’s mission to find his sister goes downhill. He hitches a ride to Valkyrie, Addie’s hometown, in hopes of saving her from some danger Blood Mama won’t reveal. Instead, Budda encounters her blood kin, led by the ominous Odyn Starkwether and his violent brother Dickie.
A drug shipment controlled by the Starkwethers has disappeared and so has Addie. The brothers have a mess to clean up, and Budda is soon in the middle of it. At first, Budda goes along willingly, if it will help him find Addie. Before long, though, Budda realizes it’s sometimes better to stay put.

I started my adult life as a journalist, but gave it up when I realized I wasn't going to become Walter Cronkite. I grew up in small towns in Missouri and Iowa, which make my adopted hometown of Louisville look like Manhattan.

I envy the dialogue of Daniel Woodrell, the sense of place of Silas House, and how Wendell Berry makes writing seem deceptively easy. I appreciate Elmore Leonard for being Elmore Leonard. I don't write like anyone but me.

a Rafflecopter giveaway
Posted by Disincentive at 6:00 AM