[60] Beneath the Slashings - character interview 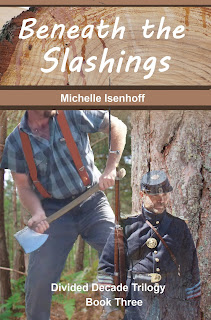 Beneath the Slashings (Divided Decade Trilogy, #3)


After four uncertain years of war, twelve-year-old Grace Nickerson is desperate to return to a sense of normalcy. But when her father returns from the army, he sells the farm and drags the family off to a lumber camp in Michigan's northern wilderness. Grace is devastated; she's never been brave. When her tears and tantrums won't change Pa's mind, she stops speaking to him altogether.Grace spends long hours working with her brother Sam and Ivan, the surly Russian cook, but at least in the kitchen she is safe from the lumberjacks. She's seen them from the window. They're rough, unkept, and terrifying. But slowly, with Sam's help, she comes to understand they're all missing home and recovering from loss, just like she is. Her fear begins to evaporate--until she learns one of them is trying to kill Pa. Who is sabotaging the camp, and why? Will the winter in the woods bring the healing Grace needs? Or will it drive a wedge into her family?

Today I have a special guest post by Michelle Isenhoff in which she shares an exclusive interview between herself and twelve-year-old Grace Nickerson, heroine of her brand new middle grade historical fiction novel, Beneath the Slashings.

Grace, at last I have the opportunity to talk with you. I’ve heard a great deal about you from your father and brother. Thank you so much for meeting me like this.

You’re welcome. I have to admit, I’m a little nervous.

Oh, please don’t be. After everything you saw and did last winter, this is nothing.

I guess you’re right. Still, I always get a little nervous whenever I try something new.

I understand you were pretty reluctant to move to the lumber camp with your Pa. Frightened even. Can you tell me a little about that?

Yeah, I didn’t want to go. Not at all. I mean, the war had just ended. It was horrible with Pa away so long. Mama died when I was little, and I used to be so afraid Pa would die too that I’d get sick. I couldn’t even sleep. When the war was over, I just wanted to go home to our farm and try to make everything how it used to be.

You got pretty angry at your Pa.

You could say that. Wouldn’t you have?

I suppose I would. Can you describe the trip north?

Sure. We took a steamship to Manistee. That wasn’t so bad. I probably would have enjoyed it if I wasn’t so mad at Pa and if I wasn’t missing Aunt Sally and Uncle Peter so much. Then we had to take a wagon to the camp. The forest was beautiful, but the places that had been lumbered were really ugly. That’s sort of how I was feeling, all broken up and jumbled. It wasn’t a very happy ride.

Was it better once you got to the camp?

Not really. It was freezing, there weren’t any girls or women, and the men were downright frightening. They smelled bad, too. But I found out they were regular fellas trying to put the war behind them just like I was.

I understand you made some special friends while you were living in the camp. Can you tell me about them?

Did Sam tell you about Gideon?

He mentioned him, yes.

How embarrassing! I hate how my twin brother always knows what I’m thinking. Can we talk about something else?

Sure, if you’d rather. Sam also mentioned someone named Loon. Who was that?

Oh, she was this really nice Indian woman who lived near the camp. I used to sneak away sometimes to visit her. No one was paying me anyway, so I didn’t feel too bad about shirking every now and then. Even though Loon was Ottawa, it felt a lot like talking to Aunt Sally.

Your Pa told me you were something of a hero in camp. Would you care to tell me what happened?

Pa said that? I told him not to. I’m no hero; I was jut being Muskrat.

Just someone in Loon’s story. Never mind. I don’t really want to talk about that either.

Okay, then I just have one last question for you. Sam told me to ask you about the bunkhouse.

(Laughing.) He would say that. It was disgusting! Imagine forty men who never take baths all crammed together in one room along with their nasty socks and boots. And they never changed their, you know, unmentionables. Ugh! And Sam was disappointed he couldn’t sleep in there. No thank you!

I think I’m with you. That does sound pretty gross. And on that note, I’ll conclude. Thank you, Grace, so much for talking with me.

Michelle Isenhoff is an elementary teacher and the author of several middle grade and young adult novels. Her new release, Beneath the Slashings concludes a trilogy of stand-alone Civil War historical fiction. It’s specially priced this month at .99. You can find Michelle at her blog, author website or hanging out on Twitter and Facebook.

Comments mean a lot! What do you think about Grace? :)
xoxo, disincentive

Posted by Disincentive at 10:12 AM