[150] Dissolution of Peace by Richard Flores IV GUEST POST: The reason I won’t use an outline 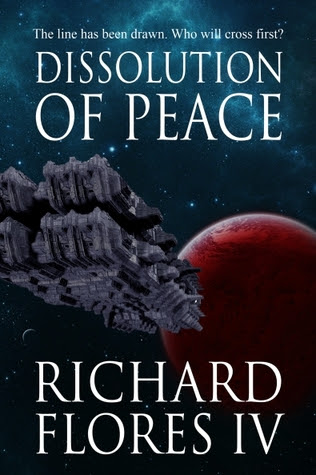 When Earth Navy Captain Christina Serenity is brutally attacked by a traitor, her life is saved by Security Forces Corporal Michael Carlson. On the heels of her recovery, her ship is attacked by terrorists, and she is thrown into a difficult assignment. She must chase after the only clue they have, a Martian ship called the Phobos, and find out what secrets it hides. To make matters worse, someone still wants her dead.


Her ship, E.S.S. Australia embarks on a mission that leads Serenity on journey of discovery, friendship, betrayal, and revenge. She quickly learns the only thing harder to prevent than war, is love.
Now Serenity must trust her protection crew to keep her alive long enough to solve this puzzle while trying to prevent an interplanetary war.


The line has been drawn. Who will cross first?

The reason I won’t use an outline
by Richard Flores IV
When I first began to study writing I noticed so many books talked about writing an outline, and the use of an outline, and the importance of the outline.  Outline, Outline, Outline.  Everywhere was this crazy word ‘outline’.  I worried I might have been doing something wrong.
You see, before I studied writing with the purpose of getting published, I wrote just for fun.  It was stress relief after a hard day at work.  So when I wrote the original manuscript that later became Dissolution of Peace, I never bothered with an outline.  I just came home, turned on the computer, and jumped into the lives of Captain Serenity and Corporal Carlson.  I’d never even thought of this thing known as an outline.  The idea was foreign to me.
But if all these other writers use an outline, and I want to learn from them, I had better do as they do.  So I wrote an outline for a novel I had wanted to write.  I thought out the characters, wrote out the plot points, and plotted out the climax.  Then I looked at my outline and thought about how I was about to become a real writer.
I’ve never touched that project since.  The main reason why?  I already told the story.  Maybe not to the depth I would have liked, but the story was told.  I just simply have had no motivation to tell that story now that I got all the fun stuff down on paper.  So my next assumption was that I must have done something wrong.
So when I joined my first writers group online, I started asking them.  I asked them how they did their outlines.  I had done my outline just like them.  And most of those writers, new and old were outliners too.
I began to panic.  Maybe I wasn’t cut out to be a writer.  Maybe it wasn’t what I was good at.  But then I thought to myself about how I had completed three novel length manuscripts with ease.  I didn’t need an outline for those, so why was I using one.  And once I thought about it, I realized that I never read a book and thought about how good the author’s outline must have been.  It was the story that mattered, not the outline.
I’m one of the few non-outlining authors out there.  Once I have characters, a world, and a general theme of a novel, I can write it.  I don’t need to write out plot points and map the novel out.  I preferred to live as my characters and to do that I had to type their story by letting them lead the way.
Don’t get me wrong, I keep story notes.  And as the characters give me an idea of where they might want to go I write it down.  But a lot of times my characters trick me.  They tell me they want to fall in love, then bam… they make me type out a messy divorce.
I’ll give you a fair warning though.  My non-outlining ways cause me a lot more work in the editing stage.  There is a ton of cutting, rewriting, and restructuring that has to be done when you don’t use an outline.  Things like prefacing and setting up certain events gets left out when you (the author) didn’t even know the events were coming.
Not to mention the loads of mundane details you typed out that you didn’t need.  I had to cut well over 30,000 words fromDissolution of Peace.  That doesn’t include the words I cut but replaced with addition details elsewhere.
In the end, outlining is something that the author has to decide if the can handle.  If you are the type of person who can let the characters lead, and don’t mind the extra work to get a story press ready, then don’t bother with an outline.  It isn’t needed, despite what the self-help books say.

Posted by Disincentive at 5:30 AM